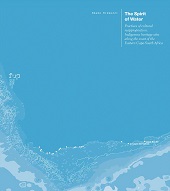 The spirit of water : practices of cultural reappropriation : indigenous heritage sites along the coast of the Eastern Cape-South Africa